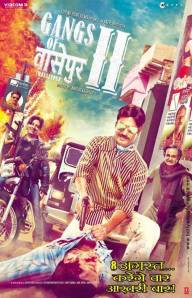 This Indian crime film is directed by Anurag Kashyap (well known Indian director).Actually the film is shot as a single film of 318 minutes totally .since it is too long and was divided into two parts (159 mins and 158 mins respectively) for the Indian Market. This part is also about Vengeance and politics among three crime families. The way of presenting is new trend set in indian cinema.

....juz another dust particle in the universe..... View all posts by Sundhar